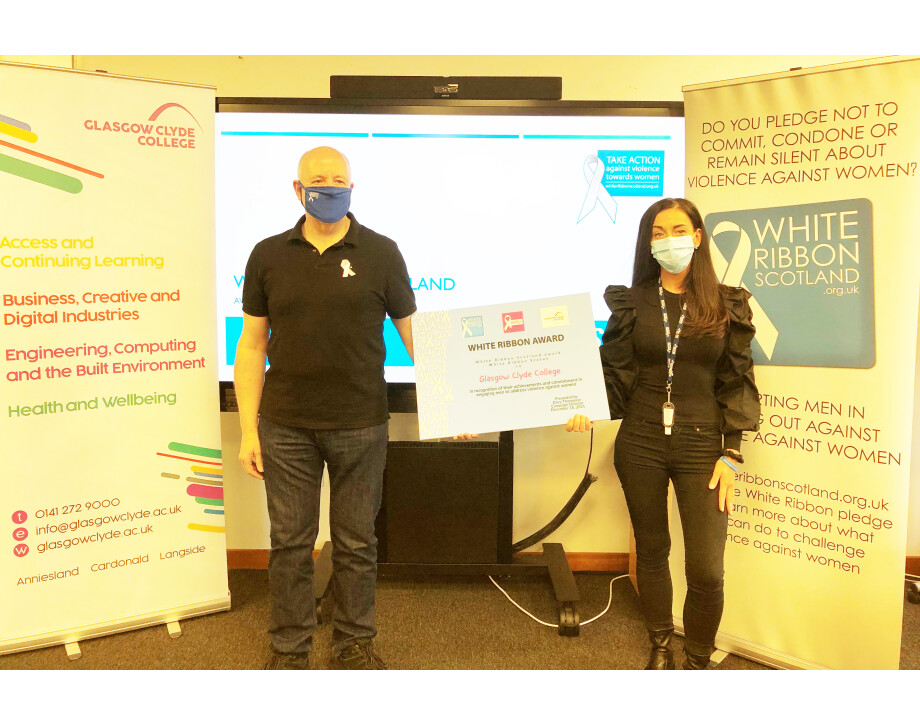 The College is delighted to achieve White Ribbon Status and was formally presented with the award by White Ribbon Scotland at a small ceremony on Friday 10 December.

Glasgow Clyde College Student Association (GCCSA) joined the White Ribbon Scotland Status Campaign (which aims to tackle men’s violence against women) in academic year 2019 / 2020. The College received the award in recognition of the work that it has done, led by GCCSA, to campaign and raise awareness of all forms of gender-based violence.

GCCSA wanted to get involved as Scottish Government data indicated high rates of domestic violence in Glasgow. It was clear to them that members of our college community could be affected but there was a lack of awareness of support available.  The GCCSA worked to raise awareness and to enhance support networks around the College for students and staff, but also in the wider community.

The work has encompassed three Student Officer teams and has continued despite the pandemic.

Presenting the award, Davy Thompson, Campaign Director White Ribbon Scotland said, “Three student teams in a row building on the work of each other to produce a series of events which together have delivered a sustained commitment to addressing violence against women by engaging men in the conversation. Delivering with the support of the College senior management team and staff and reaching out to the student body and beyond. An effort deserving of the award of White Ribbon Status. The initial Project stage complete, Glasgow Clyde College now moves forward with a sustainable GCCSA Led White Ribbon Campaign. Congratulations on your award and thank you for all your hard work.”

Some of the key points over the campaign were:

The work hasn’t finished now that White Ribbon Status has been achieved, and the team are committed to a range of activities going forward to ensure that the College is a safe community for staff and students.