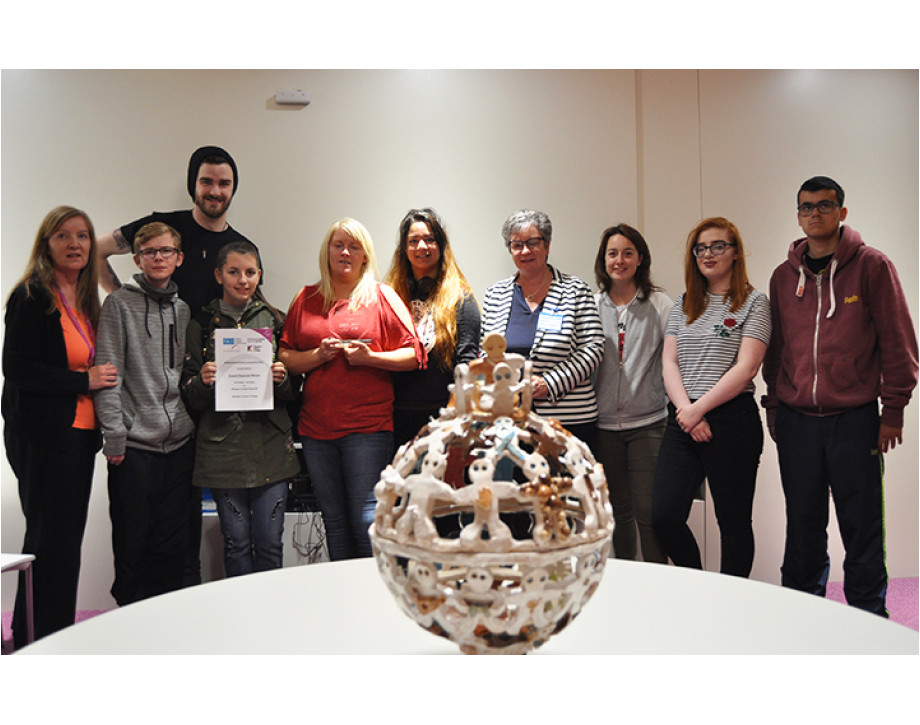 Glasgow Clyde College students are celebrating after winning first place at this year’s regional Embracing Diversity competition for the second year in a row.

The winning creation, 'All Unique – All Equal' depicts several diverse people all holding hands to form a glazed ceramic globe representing embracing equality and diversity. This was created by the College’s Prince’s Trust Team 59, based at Anniesland Campus.

Student Andrew Donaghey, who came up with the idea for the ceramic, said: “Taking part in the Embracing Diversity competition has been great for myself and the rest of the team. I had the idea of creating a ceramic piece at the early stages of the competition and the rest of the group agreed it was a good route to take. We contacted the Glasgow Sculpture Studio for tips on how to design and produce the piece which was invaluable in helping us.

“We wanted something that would allow for diversity in the design and display togetherness and solidarity in the overall piece. I think ‘All Unique – All Equal’ achieves that.”

Nine entries competed for the regional title from all three of the city’s colleges, Glasgow Clyde College, Glasgow Kelvin College, and City of Glasgow College.

Hosted at Glasgow Clyde College’s new Innovation Centre at their Langside Campus, the competition encourages students to get creative and come up with the most effective way to communicate the theme of embracing diversity. Students’ work could be presented in any format, including, but not limited to digital or interactive media, sculpture / craftwork, design, or an event.

Andrew adds: “It’s been a great competition to get involved with. The regional final was an opportunity to see what other students across the city created and their thinking behind each piece.

Jacqueline Kennedy, Prince’s Trust team leader at Glasgow Clyde College, said: “It was great news to win the College competition, but to win overall too in the regional competition is a great achievement. It’s a real boost for this particular group of students and taking part in the process has enabled the group to investigate and research diversity, and discover about some of the barriers they themselves have overcome whilst producing this piece.”

Margaret Cook, Chair of Glasgow Colleges’ Regional Board, said: “I have been very impressed by the innovation, skills and the imagination that the students have used to create each piece. All of the entries are based on the same brief, but they have been interpreted so well and so differently, and demonstrating such a variety of skills, that all the entrants should be very proud of their work.”

The competition provides a natural and beneficial way to embed Curriculum for Excellence within the classroom through active student participation, resulting in successful learners who are responsible citizens, with values grounded on the principles of dignity and respect. It also provides a suitable contextual basis for teaching staff to discuss an otherwise potentially challenging topic.