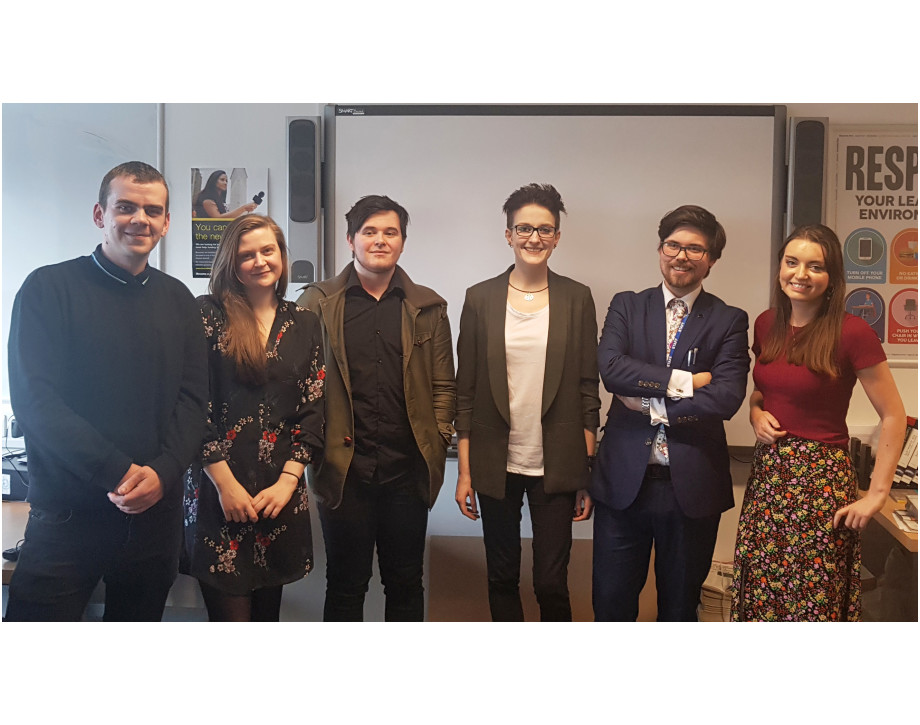 Peter Cassidy, now a breaking news reporter for STV, studied at the college for four years, starting on the Intro to FE course before progressing through to NQ Media, then HND Journalism.

He said: “It was brilliant coming back to the college that did so much to help me get into my current role, and a real honour to be asked to speak to the next generation of amazing journalists.

“What stuck out most for me was the clear enthusiasm of the students who are no doubt destined for big things.”

Jon Brady, who edited the college newspaper and magazine during his time studying on the HND, is now a Senior Reporter at the Evening Telegraph in Dundee.

He said: "It was great to come back to the college and share my experiences of my time on the course - and to pass on some tips I've picked up since starting my own career after leaving.

"I'm of the belief that this is one of the best journalism courses in Scotland, if not the UK, and to be invited back to speak to students that are in the position I was in just a few years ago was a great privilege.

"I wish them all the best of luck with their studies - and hope they too go on to great things so they can come back and share their own tips in future!"

Fellow DC Thomson writer, Hannah McLaren, also travelled from Dundee for the event. Hannah, who is the Celebrity Editor for My Weekly magazine, recently won an NCTJ national award for the highest mark in the Business of Magazine exam in the country.

Dani Gibson graduated two years ago and went straight into a job as commercial writer for The Drum magazine.

She said: “It was great coming back to Glasgow Clyde College to speak with the students. I think it’s great for them to have the opportunity to ask burning questions about their studies and what lies ahead. Certainly when I was a student, I found it really helpful talking to former students who could advise me on exams, deadlines and finding work once I finished. It was also great to see how they progressed the websites and publications, they certainly have a bright future ahead of them.”

She said: “It was really nice to be invited to come back to the college and hearing from the students, about all the hard work they are doing, almost made it feel like I'd never left! I hope some of our advice will help them with their exams, graded unit or at least let them know that there are a lot of jobs out there if you put the work in and know where to look.”

Former student James Greer, who is now studying on the BA Hons in Journalism Studies at Stirling University, also attended the event and gave students advice about progressing to university.