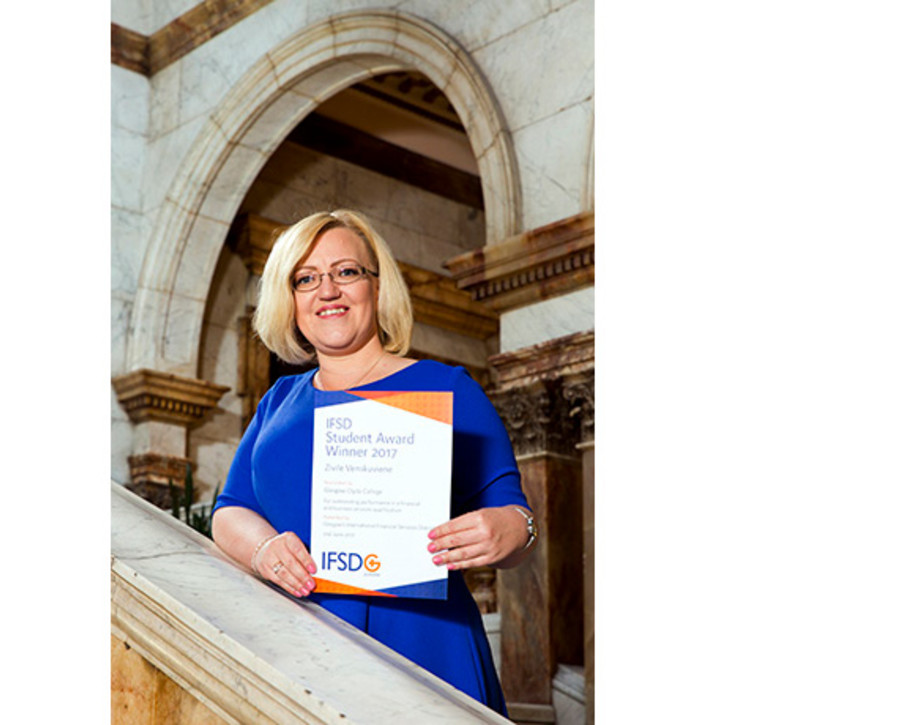 Zivile Venskuviene, from Ibrox, Glasgow has been recognised by Glasgow’s International Financial Services District (IFSD) for achieving an outstanding performance in a financial qualification. At an awards ceremony for the IFSD Glasgow Student Awards 2017, Zivile was one of six students, representing universities and colleges in Glasgow, to be presented with a certificate and £250 to mark her achievements.

Zivile, 37, was nominated for the award by Glasgow Clyde College where she has achieved HND Accounting. She hopes now to pursue a professional accounting qualification through ACCA.

The awards programme was established by the IFSD Partnership to highlight the wealth of talented graduates emerging from Glasgow’s universities and colleges, prepared for careers in financial services. All six winners were nominated as ‘outstanding achievers.’

Presenting the award to Zivile, Sharon Hamilton, Director, Financial and Business Services, Scottish Enterprise said, “Many congratulations to Zivile on her achievement. We know that the availability and quality of skills are key factors for the success of financial institutions worldwide; the IFSD Student Awards underline the exceptional talent graduating from Glasgow and the West of Scotland for the global financial services industry today and in the future.”

Since its launch in 2001, the IFSD has been developed by a partnership of the public and private sectors led by Scottish Enterprise and Glasgow City Council. Over £1 billion has so far been invested to transform the previously run down area of the city centre. The District has attracted over 15,000 financial sector jobs from some of the biggest names in global finance including Morgan Stanley, JP Morgan, Barclays, BNP Paribas, HSBC, esure, Tesco Bank and Aon.