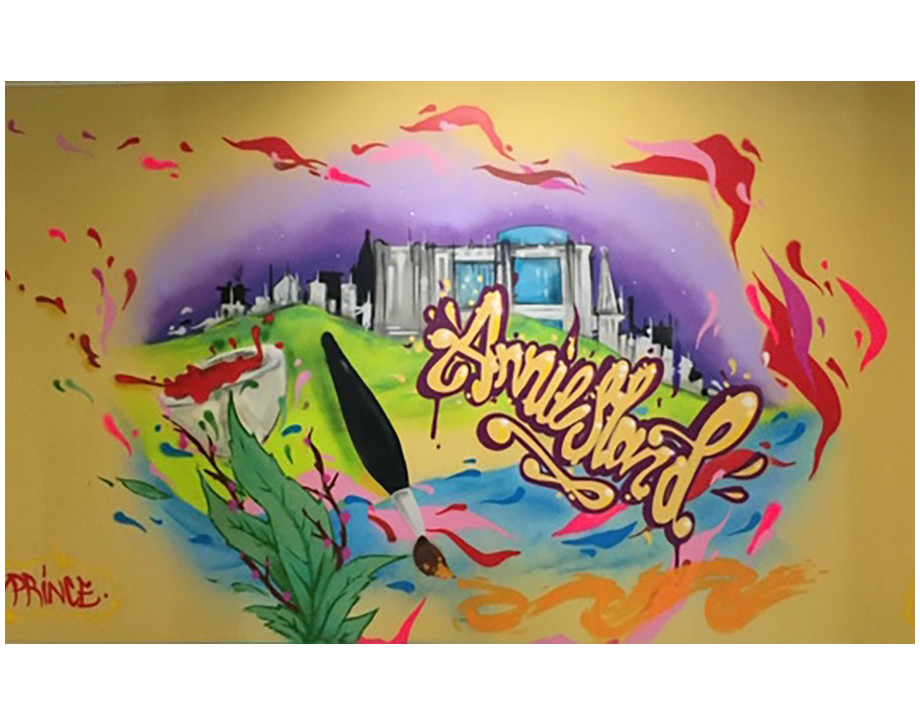 Jefferson Ferris, 32 from Glasgow, graduated from Glasgow Clyde College in 2016 having completed an HND in Contemporary Art Practice.

Jefferson is now a successful working artist specialising in graffiti and illustration across Glasgow.

Jefferson has created three unique pieces of artwork at each of our campuses, you can see a film of the artwork at Anniesland Campus being created below.

“Even from a young age, I was captivated by graffiti art. I used to watch films set in New York just to look out for any graffiti that was captured during filming; if I caught a glimpse of it I would stop the recording and re-draw it in my own style.

“I had a great art teacher at school who helped me explore the history and form of graffiti which led me to experiment with different methods of creating font and text. After leaving school, I started working in retail but produced art in my spare time. In 2015, I decided to take the next step in pursuing a career as an artist and looked for courses that would help me move forward.

“I found Glasgow Clyde College’s HND Contemporary Art Practice course, which fitted with what I was looking for. The course covered a whole range of techniques and mediums I hadn’t considered before such as screen printing, which quickly became one of my favourite classes, as it brought together my retail experience and my love of graffiti.

“My tutors at the College, Anne Hamilton and Marlene Lochhead, helped broaden my ideas and awareness of other arts. Getting to work with them was a great experience. Seeing how I could transfer my knowledge into other avenues was inspirational, and it gave me a great sense of what I could do and achieve as an artist. I am very fortunate to have had them as mentors.

“Alongside Marlene and Anne’s guidance, studying the HND as a contemporary artist allowed me to learn new avenues which helped change the concept of my art, but I also found similarities in the process of painting methods in the idea of layers and application of colours, which I apply to my work as a graffiti artist. Studying gave me the confidence to combine different areas of learning to suit my style.

“Things that hold my attention are art forms and individuals who are rooted in or who paint with a cultural background: a focus, a drive with a feel of anti-establishment. Before I would have just looked at graffiti, but now it varies immensely because of my learning experience and knowledge.

“Because of my specified methods of paint, there are no limitations. I can push boundaries with text, font and light to create something captivating for audiences. Nothing is the same; I might have developed a signature style, but no two pieces of work are the same.

“I always wanted to make graffiti more of an acceptable art form and change the stigma that was often attached to it. I definitely think that is happening and people’s perceptions of graffiti are changing. Just look at all the murals that are in Glasgow or how many graffiti tours operate in Berlin – it’s becoming part of a city’s culture as people become more accepting of it.

“I’ve been working quite a lot in the events space, but I’d really like to move into print and canvas work at some point in the future. I don’t feel I have reached my full potential yet, and I know I can gain more knowledge and push things even further. I am currently building up a big body of work that will be displayed next year. It will be my first solo show and include screen prints and abstract work that definitely hold my graffiti methods but is also miles away from my usual work. Art is going to be in my life as long as I can push boundaries.”