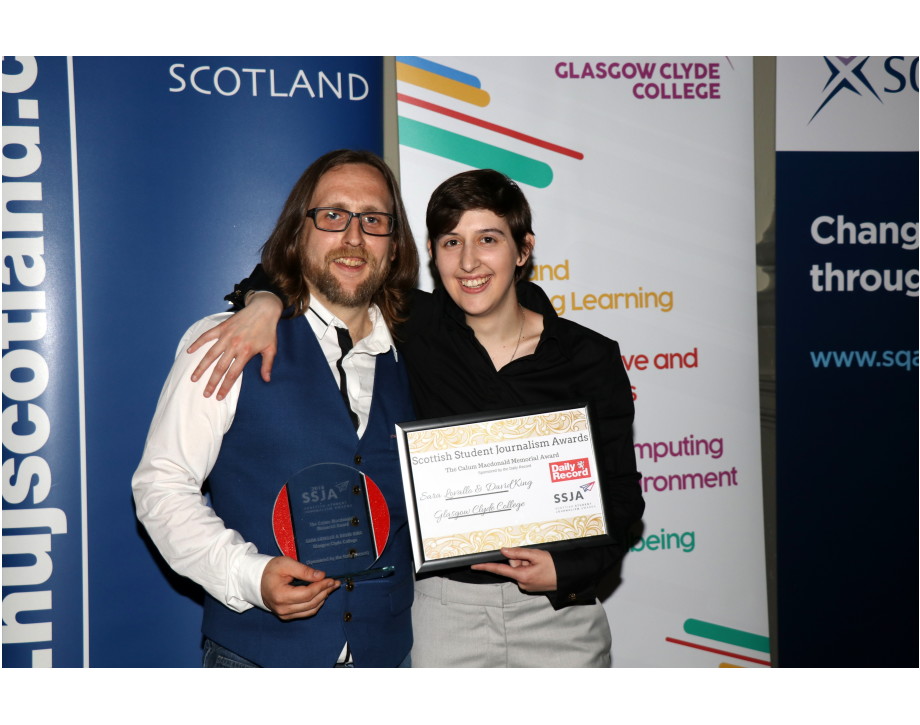 The event, which has been hailed a ‘huge success’, was held at Glasgow’s St Andrew’s in the Square on Wednesday with more than 200 students, academics and industry leaders attending.

Our second year HND Practical Journalism class won Student Publication of the Year – for the second year running – with their Graded Unit magazine, The Pattern.

The Pattern is a Paisley community magazine, which was distributed within an edition of the Paisley Daily Express, in partnership with Media Scotland.

Pattern editor Hannah Gunn said: “It was amazing to win Student Publication of the Year at the SSJAs.”

“We worked hard all year and everyone put in so much effort to The Pattern so it was really nice to have all that work recognised by such influential people in the industry.”

David said: “I'm still in shock, I can’t describe how much this means. To be named twice in the same category is one thing, but to win outright alongside my wonderful classmate and colleague Sara Lovallo is emotional to say the least.”

“Along with the support of some of the best people I have ever had the pleasure of meeting in Karen Bale and Felicity Teasdale, my lecturers in News, and Features, I can honestly say this would not have been possible without them.

“Roll on 2nd year, roll on more exposés, roll on the rest of my life.”

He said: "I'm still a little lost for words about winning, which those who know me will tell you is a rarity.

“I'd just like to thank the SSJA judges and the NUJ. Writing about music is a passion of mine and has been for some time so to win the Arts & Entertainment Story of the Year is a nice acknowledgment that I'm not totally wasting my time. “

Our first year’s college newspaper, The Clyde Insider, was commended for Student Publication of the Year while their Clydeinsider.co.uk website was runner up for Student Website of the Year.

Second year student Stephen McCabe was commended for News Story of the Year while first year Valentina Servera was runner up for Column of the Year.

The awards were organised by GCC’s second year HND Media and Communications class, who put in months of work to ensure the event was a success.

SSJA team spokesperson Amy Beaton said: “We are extremely happy with how the night turned out and all our hard work paid off.

“We enjoyed everything about organising this year’s awards and a huge congratulation to the runners up and winners. It was a great night and sets the bar for many more to come,”

Glasgow Clyde College lecturer Karen Bale, who managed the awards with the HND class, said: “We are absolutely delighted with how the evening went and I’m very proud of our students for the hard work they put into ensuring the event was a huge success.

“We would like to thank all the judges, hosts, speakers and sponsors as well as the students who entered the awards. Congratulations to all the winners and runners up.

“I’m absolutely delighted with the awards GCC students won at the event, they have worked so hard this year and they deserve to be recognised for their talent and efforts.”

For the first time the event was run in partnership with the Scottish Newspaper Society and in association with BBC Scotland.

Scottish Newspaper Society director John McLellan said: "The Scottish Students Journalism Awards are a brilliant showcase for young journalists, and our congratulations go to all the winners and finalists.

"But it's also a demonstration of the belief in the importance of journalism that so many talented young people want to be involved.

"Glasgow Clyde College did a fantastic job in pulling the whole award scheme together and we look forward to being involved in an even bigger and better event next year."

The awards were run in association with BBC Scotland – and the winners from the three BBC categories will be given work experience at the BBC.

BBC Scotland’s Deputy Head of News, Pete MacRae said: “We are very pleased to have been formally associated with this year’s Student Journalism Awards for the first time.

“We were delighted to introduce two new award categories; Mobile journalism and Podcasting; as well as judging the traditional Broadcast Journalism award.

“These new categories are designed to give student journalists the opportunity to demonstrate their readiness to join the news media industry in Scotland. The winners, runners-up, indeed all the shortlisted candidates displayed great story-telling potential. We are confident that the future of Scotland’s journalism is in good hands.”

The full list of winners and commended is as follows: