Update on COVID guidance for January 2022 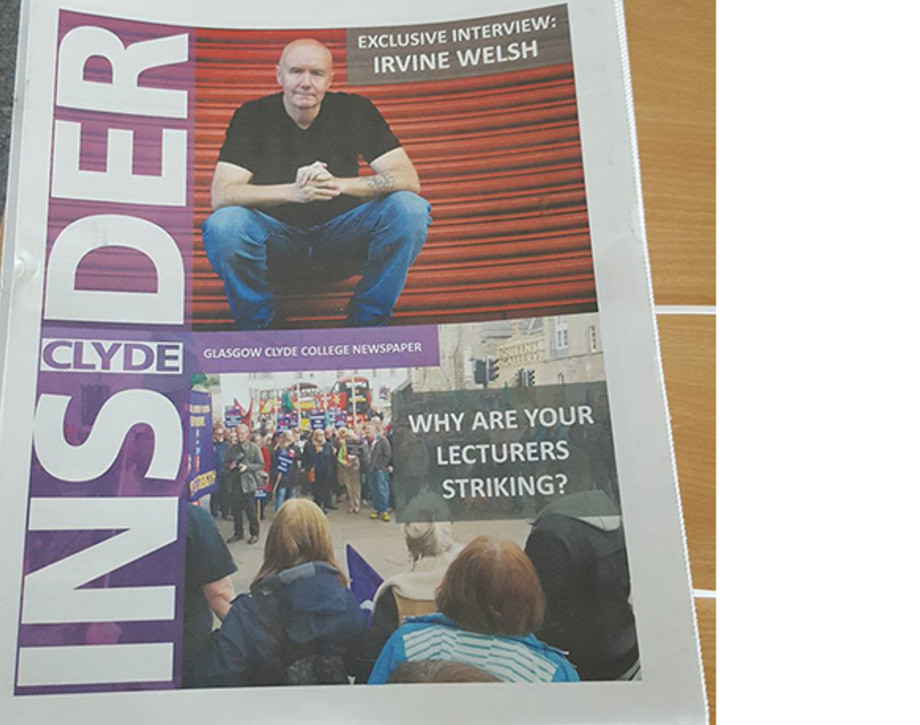 The summer issue of their paper, the Clyde Insider, has been published hot on the heels of this impressive achievement. Clyde Insider is produced, written and designed by first year HND Practical Journalism students and is available at all three campuses.

It features an exclusive interview with author Irvine Welsh – a story which won first year student John Glover a nomination for Scoop of the Year at the Scottish Student Journalism Awards (SSJAs).

John, who is deputy editor of the Clyde Insider, is also nominated for his coverage of the ongoing lecturers’ strikes in the Calum MacDonald Award category at the SSJAs – a special category recognising investigative journalism, which is in memory of the former Herald and Daily Record journalist who died at the age of 32.

John said: “After months of hard work and stress over graded units, shorthand and the nationwide college dilemma, the summer edition of the Clyde Insider is finished. The design team- who deserve most of the credit - worked tirelessly on the paper, subbing the copy and perfecting the final page layout more times than I can remember but, in the end, what they have created is a wonderful piece of art that looks very professional. “

John’s latest story on the current EIS industrial action, which he worked on with classmate Stephen McCabe, also features in the Insider.

First year student Stephen is also nominated for the Investigative Award, for his campaign and fundraising work for the family of tragic school-boy Lennon Toland.

Second year HND Practical Journalism student Rebecca Kennedy is also nominated for her coverage of the Palestinian conflict – and for helping to educate and inform other students on the subject.

The second year students’ magazine, Clyde Outside, is shortlisted for Student Publication of the Year. The magazine was produced in partnership with Media Scotland – and was distributed within the Paisley Daily Express thanks to the sponsorship from rail infrastructure company QTS.

Its sister publication, the Clyde Insider, was printed this week after the hard work and dedication from the first year students.

Head of design Hannah McLaren said: “Working on the Clyde Insider for the second time round has been both educational and rewarding. “We learnt so much from the first edition. Therefore, having the chance to do this again provided time for reflection.

“We have built this stylish publication together and everyone involved has truly earned the skill set it takes to reach print. The adaptability and determination of our contributors are valued qualities by any standard and will do wonders for our journalistic careers.”

Journalism and media lecturer Karen Bale said: “It’s been an incredible couple weeks for the journalism students and all the staff are very proud of what they’ve achieved.

“The latest edition of the Clyde Insider is the best yet, all credit to the design team for yet again pulling out all the stops to produce such an engaging publication.

“The content is second to none and the students must be commended for their hard work. Well done to all our students shortlisted for the Scottish Student Journalism Awards – even just been nominated is an achievement and we wish them the best of luck.”

The Scottish Student Journalism Awards will take place in Glasgow on 25 May.