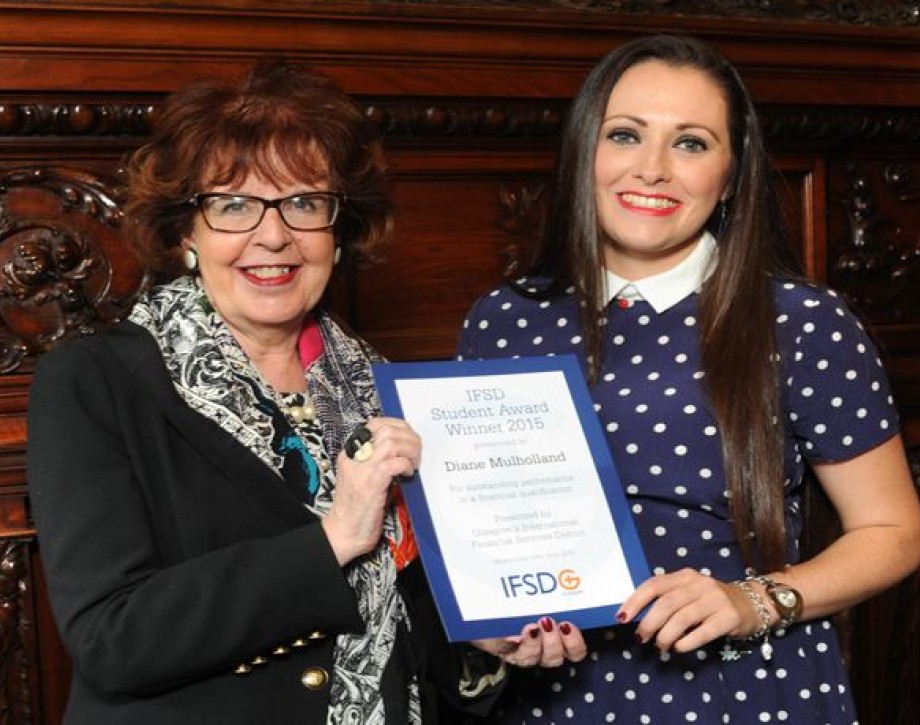 Diane Mullholland, from Blairdardie in Glasgow, has been recognised by Glasgow’s International Financial Services District (IFSD) for her top ‘A’ grade performance in gaining an HND in Accounting at Glasgow Clyde College. At an awards ceremony for the IFSD Glasgow Student Awards 2015, Diane was one of seven students, representing each university and college in Glasgow, to be presented with a certificate and £250 to mark their achievements.

Diane, 30, managed a restaurant in Paisley for several years and only embarked on her studies after her first daughter was five. She was pregnant finishing her first year with her second daughter and returned for her 2nd year still expecting. She had an emergency c-section on the Monday of October week and returned to her studies the following Monday

She has now been accepted by the University of the West of Scotland to start studying in September for an Accountancy degree.

The awards programme was established by the IFSD Partnership to highlight the wealth of talented graduates emerging from Glasgow’s universities and colleges, prepared for careers in financial services. All seven students were nominated as ‘outstanding achievers.’

Presenting the Award to Diane, Bailie Liz Cameron, Executive Member for Economic Development, Glasgow City Council said, “Many congratulations to Diane on her achievement. The IFSD Student Awards underline the breadth and depth of talent graduating from these universities and colleges which, we believe, is very reassuring for existing financial services companies in the city and prospective inward investors.”

Commenting on Diane’s achievement, Carol Thomson, Senior Lecturer, Business and Digital Technologies, Glasgow Clyde College said, “Diane is an excellent student. She is very able academically, passing all assessments first time to a very high level.. She also displays a range of personal qualities which make her stand out in the class.

She is a joy to work with and she has a great relationship with all of her tutors and her fellow classmates and overall is a very worthy winner of the IFSD Student Award.

Since its launch in 2001, the IFSD has been developed by a partnership of the public and private sectors led by Scottish Enterprise and Glasgow City Council. Over £1 billion has so far been invested to transform the previously run-down area of the city centre. The District has attracted over 15,000 financial sector jobs from some of the biggest names in global finance including Morgan Stanley, JP Morgan, Barclays, BNP Paribas, HSBC, esure, Tesco Bank and Aon.